What Does A TV Aerial Allow You To Do?

Have you noticed the aerials on roofs? Probably we are so used to seeing them that we don’t really consider why they are there. You might think in this digital era that you do not need a TV aerial or antenna. However, if you want to watch live TV, you need one. Since the change over to digital TV in 2013, an aerial is a way to access the Freeview channels of terrestrial TV. Your aerial connects to a Freeview box or your smart TV.

For a while, it did seem that a TV aerial was not needed, mainly as analogue TV had so few channels in contrast to Sky, which you access via a satellite dish. However, TV aerials are once again in regular use, either indoor or external TV aerials.

What Is An Indoor TV Aerial?

This is a portable aerial, often a mini replica of a roof aerial and serves the same function. Or it can be a loop aerial. Unfortunately, this is not a particularly good aerial. Its performance is questionable, and the reception can be very poor.

What Is An External TV Aerial?

There are several TV aerials in use. Just look up at the rooftops. Before the digital age, the most popular aerial was a Yagi TV aerial. Different manufacturers produce differing designs. But you would quickly identify this aerial by the long rod (boom) with smaller spikes going off at right angles (elements). A deflector at the backstops signals from behind, and a dipole receives the radio waves.

More popular now are the long pole aerials. These work differently from Yagi aerials because they don’t have a dipole or back deflector. These aerials are excellent for ignoring impulse noise that can cause pixelation by your TV signal breaking up.

Why Have A TV Aerial?

Because you can access far more TV stations than ever before from Freeview and some This includes,

And many more, including regional variations.

You also need a TV aerial to view subscription channels such as TalkTalk TV, EETV, and BT Vision. These use a Freeview TV connection which is via the TV aerial.

Watching TV From Your Tablet

Want to watch TV from your tablet, smartphone, iPhone, or iPad? Easy, using a DVB-T405, you can watch and record digital TV on your mobile devices. You can do this without WiFi or using mobile data. First, you need to connect the T405 to an indoor or rooftop TV aerial to create a Wireless TV network. Then, you can access all your favourite programmes using the Siano TV app on Android and Apple devices. 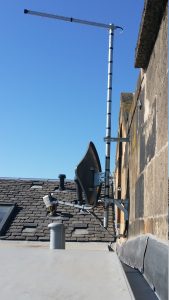 How we can watch TV has exploded over the last few years. Sometimes it is so confusing as to what you should use for your

What Does A TV Aerial Allow You To Do?

Have you noticed the aerials on roofs? Probably we are so used to seeing them that we don’t really consider why they are there. You 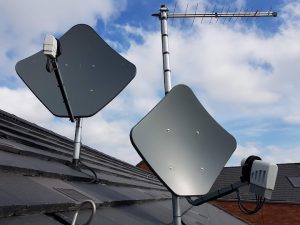 How Long Should a Satellite Dish Last?

Quality of the Satellite Dish The quality of the satellite dish is the first factor in how long it will last. A dish made with

Satellite and Aerial installation and repair specialists. we also wall-mount TVs, set up home cinema and install CCTV systems in the Ayrshire area